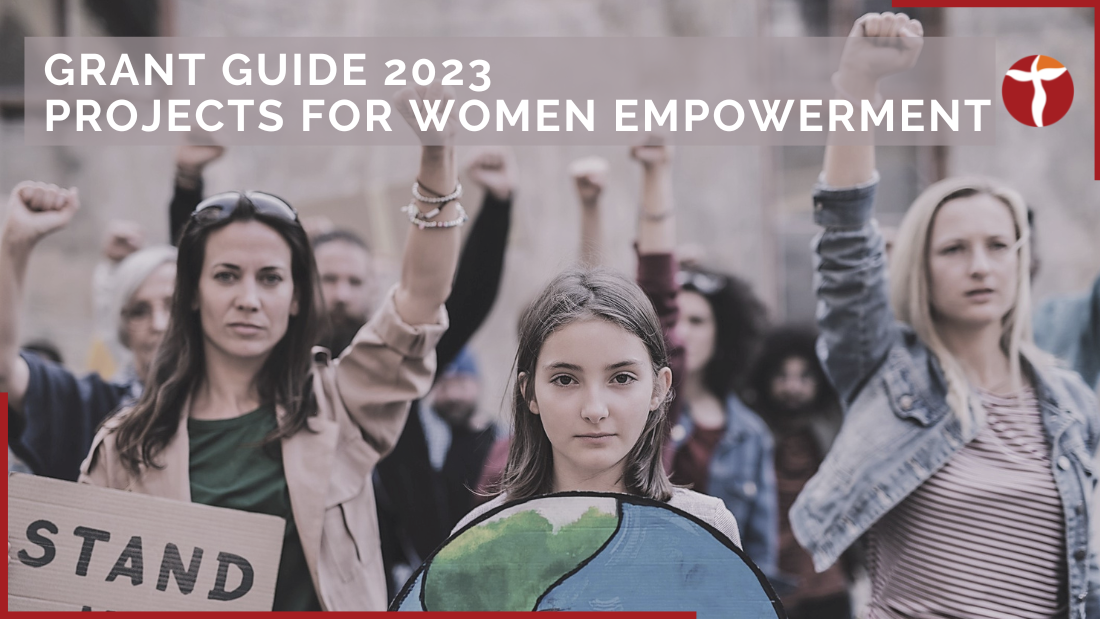 Are you starting a project or an initiative that looks towards a feminist future and seeks gender equality? Will it help to eliminate gender injustice and empower women? If you have an idea for a project or an initiative ready, you must be wondering how to fund it to make it a reality. Our guide will help you find the funding and grants for women empowerment projects.

We know how overwhelming this process can be, so we conducted some preliminary scouting to save you the hassle! Of course, donors’ funding priorities can change at any time, but below you will find a few short and long-term funding opportunities specifically for non-profits committed to women.

ABOUT | Mama Cash is an international fund established in 1983 by five feminist activists. It currently provides grants through five funding programmes:

Please check the website for more details on each of them.

LOCATION | worldwide, subject to conditions of the specific fund and eligibility exclusions.

WHO CAN BE FUNDED | Organisations supporting women’s, girls, queer, and intersex people’s campaigns worldwide. Mama Cash is open to supporting informal, unregistered groups of activists, or networks, or coalitions of organisations. It prioritises groups with annual budgets below USD 200,000. It is also clear on actions and groups that it does not support – you can read about it here.

WHAT CAN BE FUNDED | core support grants, which can also include support for specific programmes, projects, or initiatives. They include single and multi-year grants.

APPLICATION PROCESS | check each respective fund for more details on eligibility and the application process.

ABOUT | The Oak Foundation offers grants to organisations tackling global, social, and environmental issues to create a safer, fairer, and more sustainable world. Its grants are offered on an invitation-only basis.

It has several thematic programmes such as environment, housing and homelessness, and they include Issues Affecting Women Programme – and we summarise it below.

GRANT SIZE | Approximately USD 25,000 – USD 7 million, with an average award of USD 600,000. With a few exceptions, the Oak Foundation does not provide programme grants under USD 25,000. The majority of awards are multi-year in duration.

LOCATION | The Balkans, Brazil, Central America, the Democratic Republic of Congo, Mexico, Switzerland, the United Kingdom and the United States, as well as organisations from Moldova, Bulgaria, the North Caucasus and India. The Foundation’s movement-building grant-making has a broader geographic focus (see below for details on types of actions funded).

WHO CAN BE FUNDED | women-led rights-based services that address violence against women.

APPLICATION PROCESS | Despite the invitation-only application process, where grantees are invited to apply based on fieldwork and research, and the majority of awards are made to long-standing partners, the Oak Foundation wants to hear about ideas and work that fit within their programme strategies. Therefore, if an organisation believes that strong alignment exists with Oak Foundation’s funding priorities, it is encouraged to submit an unsolicited letter of inquiry.

ABOUT | FRIDA focuses on resourcing young feminists around the world. It provides young women, girls, and trans youth with the resources they need to amplify their voices, bring attention to their work, support, flexibility, and network to keep their vision and influence alive.

GRANT SIZE | for core support grants up to USD 6,000, over a period of 12 months, with an opportunity for renewal. Under its Funding+ Model, the grant amount varies. For example, the Capacity Strengthening Grant of USD 2,000 is offered in conjunction with the core grant (see here for more details).

WHO CAN BE FUNDED |

WHAT CAN BE FUNDED | general support or funding for specific projects. FRIDA operates a Funding+ Model where in addition to core support it can also provide different types of support and resources (more information).

APPLICATION PROCESS | The applications are made through an online platform during an open call for applications. In 2022, applications were welcome in Portuguese, Spanish, French, Russian, English or Arabic.

FRIDA receives ‘general grant’ applications online every year for a period of 4 to 6 weeks. Check their website for information on the next round of calls for proposals.

ABOUT | Global Fund for Women, established in 1987, funds bold, ambitious, and expansive gender justice movements to create meaningful change that will last beyond our lifetimes. It operates on an invitation-only basis.

GRANT SIZE | no information on the Fund’s website. However, another website suggests that the grants vary from USD 500 to 20,000 and are intended to be spent within one year.

WHO CAN BE FUNDED | Non-registered or registered NGOs who:

The Fund does not provide support to government entities, political parties or election campaigns and international organisations proposing projects with local partners.

APPLICATION PROCESS | Profile forms are open all year in the online system, where organisations can register their interest (see here for more information on the process). A proposal can only be submitted upon the Fund’s review and invitation.

THE ALLIANCE FOR GENDER EQUALITY IN EUROPE

ABOUT | The Alliance’s vision is a just and fair European society where gender equality is achieved for all people, especially women, girls, boys, men, and those who identify as LGBTQIA+ living in vulnerable situations. The Alliance issues periodical calls for proposals, with varying aims and thematic priorities.

WHO CAN BE FUNDED |

WHAT CAN BE FUNDED | Funding can be awarded either for core support or for project support. Core support is understood as core support as funding for any costs incurred by the organisation that is not targeted at specific activities/projects (usually overhead costs such as salaries and training of admin/core staff, rents, admin and office costs, equipment, etc.).

ABOUT | SheDecides Spark Grants offers small grants for women empowerment to young feminist groups, collectives, movements, and coalitions to help them open up dialogue about bodily autonomy and fight for sexual rights.

LOCATION |The applicants should be based in Africa, Asia, Latin America and the Caribbean, the Arab Region, Eastern Europe.

WHO CAN BE FUNDED | any feminist groups who are organising around bodily autonomy and sexual rights:

SheDecides Spark Grants will prioritise nascent groups that have limited resources (e.g. no paid staff, no office space, etc.). The group does not need to have a bank account, residence permit or any other form of identification to apply. It does not have to be registered as an NGO.

APPLICATION PROCESS | The current round of applications is closed. You can contact the team to find out more about the grants at: sparks@shedecides.com.

ABOUT | The Mediterranean Women’s Fund offers grants for women empowerment projects to support the women’s movement in Mediterranean countries. They focus on flexible and accessible financial support to women’s associations and their networks and strive to strengthen the organisational capacities of women’s rights defenders.

LOCATION | Countries bordering the Mediterranean only.

WHO CAN BE FUNDED | to qualify for support, the organisations must meet all of the criteria below:

The Fund prioritises organisations that:

Click here for more information about your organisation’s eligibility for a grant.

APPLICATION PROCESS | Applications are accepted anytime. You can fill out an application form (available on the website) to enter the first stage of the application process. Upon successful review, you will receive an invitation to submit a more detailed application.

ABOUT | Astraea works with LGBTQI groups that promote racial, economic, and gender justice, mobilising communities to challenge oppression and claim human rights. It provides funding through four grants: US Fund, International Fund, Intersex Fund and Global Arts Fund. You can find an overview of the grants here.

As of the time of writing this article, only the International Fund is open for applications, so we summarise it below.

WHO CAN BE FUNDED | Groups, projects and organisations led by lesbian, gay, bisexual, transgender, queer and intersex (LGBTQI) communities working for progressive social change and addressing oppression based on sexual orientation and/or gender identity.

WHAT CAN BE FUNDED | project support or organisational support

APPLICATION PROCESS | The fund provides grants two times per year. Check the grant website for more information. Unsolicited letters of interest will not be considered.

ABOUT | Sigrid Rausing Trust was established in 1995 by Sigrid Rausing, a Swedish philanthropist, to promote the values and principles of human rights, equality, and the rule of law, and to preserve nature from further degradation. It is run by a board of trustees and supported by donations. The Trust runs ten grant-making programmes organised under three themes: human rights; fairness and inclusion and the environment. In addition, it makes occasional grants in other fields, including medical and humanities research.

The Trust does not accept unsolicited funding applications. They identify organisations with projects that align with their funding goals and invite them to apply for a grant.

GRANT SIZE |There is no minimum or maximum level for a grant. However, the Trust will normally not support more than 30% of an organisation’s budget or a project.

LOCATION | The Trust is active in a number of regions. It has a particular interest in Central and Eastern Europe and Eurasia, North Africa and South Africa.

WHO CAN BE FUNDED | The organisations that have been proactively identified by the Trustees according to the Trust’s priorities for grant-making.

APPLICATION PROCESS | The Trust does not accept unsolicited funding applications. They identify organisations with projects that align with their funding goals and invite them to apply for a grant. For more information about the process, check their website.

Please note that the funds listed above are a selection but more organisations provide support for women empowerment projects. We have focused on funds that have international focus and whose websites provide information in English. However, there also exists organisations with a national focus, and whose websites may only be in local languages, so make sure you check what support is available in the country where you are based. And if you are a bigger organisation, you can also consider applying for EU grants.

Finally, please make sure to check our resources on -fundraising and applying for grants, in particular our training offer and our pro bono initiative Fundraising Conversations . You can also sign up for our newsletter below to receive the latest updates about our activities and shoutouts on useful resources for non-profits.