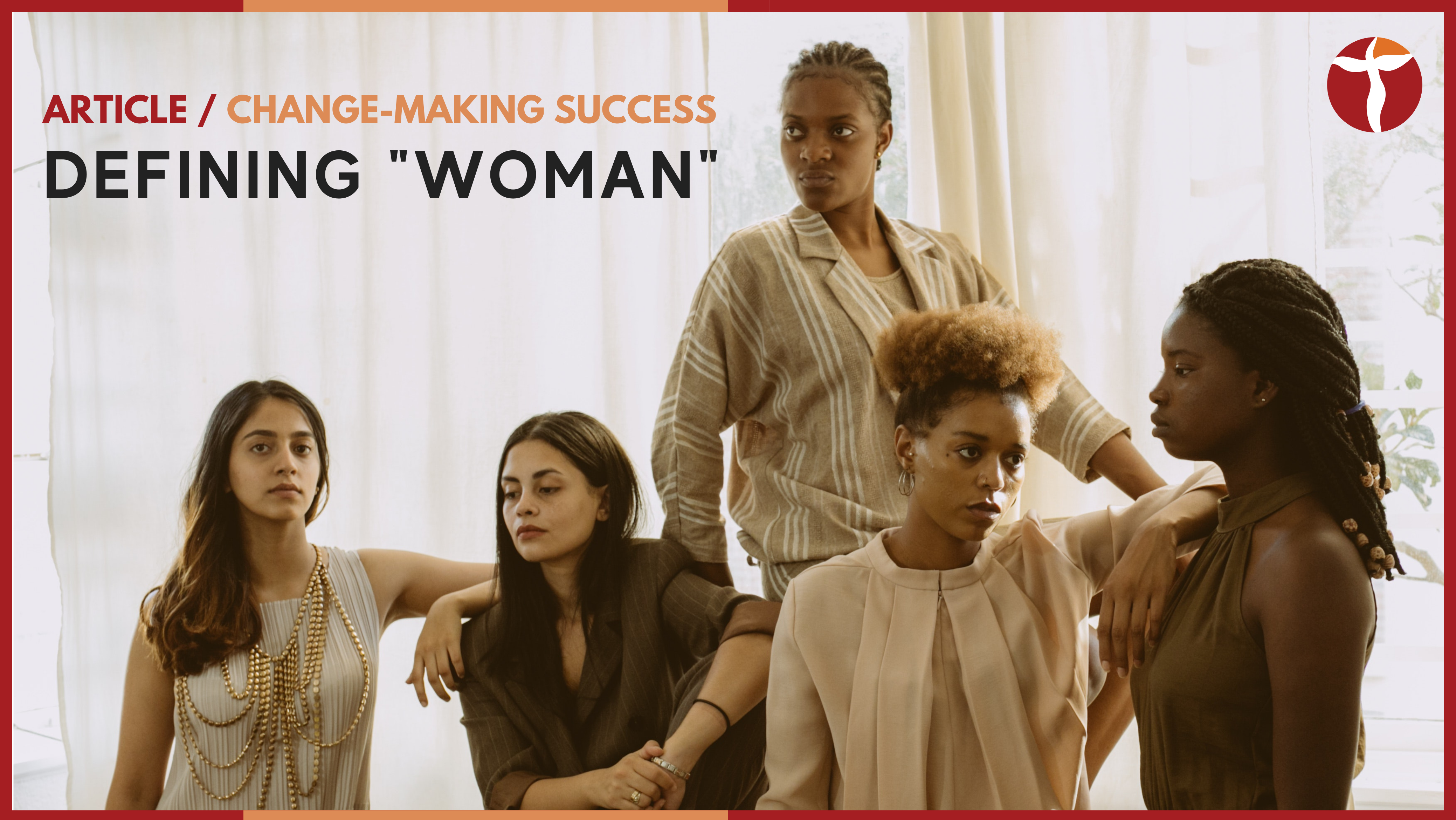 This is the story of how a women’s rights activist successfully changed a degrading and dehumanising definition of ‘woman’ in Oxford University Press’s dictionaries.

In January 2019, Maria Beatrice Giovanardi casually web-searched the definition of the word ‘woman’. As readers may know, Google displays word definitions as a featured snippet, so the user sees the result directly without needing to click on any of the search results links. This ‘widget’ is sourced from Oxford Dictionary of English, published by Oxford University Press.

In this instance, rather than being met with a nuanced description of the complex, wonderful being that a woman is, Maria Beatrice Giovanardi was met with a shocking surprise.

The Oxford dictionary responded with sexist terminology. Directly provided synonyms included “bitch”, “piece”, “baggage.” In the example sentences, women were referred to as passive and at the subordination to a man: “I told you to be home when I get home, little woman“,  or alluded to in a frankly strange context – “If that does not work, they can become women of the streets.“

Maria Beatrice Giovanardi turned her indignation at this outrageous definition into action. Through tactful campaigning, resilient persistence, and mobilising an equally outraged support network, Oxford University Press owned up to the error of their ways. In September 2020 after a successful campaign that sparked a public debate, the Oxford Dictionaries’ definition of woman now stands corrected.

The example sentences no longer denote a woman to be something of a man’s, instead a beautifully affirmative example sentence ornates the Google search results page: “She was the first Oxford woman to take a first in Physics“. A woman no longer equates to “baggage,” and, in an important step for the LGTBQ+ community: a woman may be a “wife to a person,” rather than a “man’s wife.” The supposed synonym “bitch” remains, on the grounds that this term is used in various circumstances to describe women, often by women themselves, and, through compromise, it is now marked in the dictionary as ’offensive.’

The campaign was a win for equality. It called out an established institution and an established publication for its outdated and sexist production. Maria Beatrice Giovanardi and her team stand as an example of successful activism, proving to us all that difficult battles can be won.

How did she do it?

Here is our analysis and the key points of impact that made this a success.

1. Do not stay quiet – even when facing a major authority

Whilst this may seem like an obvious step, the truth is that things only change when someone speaks out and chooses to act.

How many people, how many women, had read this definition before Maria Beatrice Giovanardi? It may have been easy to accept, as the particular prestige of Oxford University makes it a power source – a pinnacle of ‘the way things are.’

To confront it, and more so to change it, may not even appear as a possibility for many readers, despite its shocking content. However, what we have in this impact story is proof that ‘the way things are’ can be changed.

2. Start a petition to show collective will

Maria Beatrice Giovanardi’s first action was to set up a petition. It called upon Oxford University Press to change their sexist and outdated definition of ‘woman’. A petition is a great tool for creating an impact, as it demonstrates collective support for change. In this way, Maria Beatrice Giovanardi became an advocate for many, instead of an isolated voice.

The campaign gained almost immediate momentum as more people became aware of the issue. Within a month and a half of being created, the petition had been signed by 20,000 people. How did this happen?

3. Reach out to allies and peers

The first port of call was to reach out to those already active in the feminist community.

The petition was shared in various women’s rights groups on social media, and Maria Beatrice Giovanardi personally contacted as many people as possible to get them onboard.

This boosted the petition to a strong start.

Whilst the support for eradicating sexism in a prestigious dictionary comes greatly from the obvious fact that it should not been this way, it took the initiative and energy of someone to start the activist movement for this to take shape – a reminder of point 1, that for something to change, it first must be confronted. 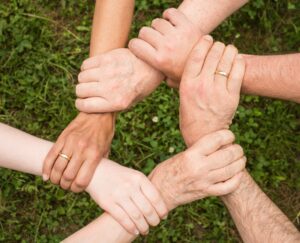 This step became a crucial factor in the success of the campaign.

Alongside reaching out to allies, Maria Beatrice Giovanardi contacted as many journalists and newspapers as possible. She sent hundreds and hundreds of emails to as many relevant contacts as she could source.

This proactive and persistent reach out brought major results. In July 2019, The Guardian, an influential UK newspaper, published an article on the Oxford Dictionary definition and the ongoing signature collection under the petition. This significantly propelled the impact of the campaign.

Why was this such a vital checkpoint?

Once the story made it to national newspapers the visibility of the issue significantly heightened. It now reached a vast and varied number of people. This also means that more and more voices joined the conversation, and many of them in support of the call for change.

Celebrities and famous figures discovered the campaign, sparking them to join the debate. Although not all agreed (as we will come to later), the very fact that they publicly announced their opinion on the matter continued to raise great awareness of the campaign.

Importantly, the involvement of the press gave the campaign a further strength: by the power of journalism, the movement achieved credibility. The campaign now entered discourse at this widely listened to level, and this meant it was a matter to be taken seriously.

Press engagement gave the campaign dimension in a further capacity. Journalists prompted lexicographers, experts of the dictionary, to provide their opinion. This propelled the campaign from an activist movement to a request, which had to be considered by experts and those who had the power to authorise change.

With the scale that the campaign had reached, Oxford University Press could simply no longer uphold a status of ‘no comment.’ Eventually, the dictionary publishers responded via the press, and it was published by the Guardian in a follow up article in November 2019, that they were now supposedly ‘reviewing’ their definition of woman.

Activists’ voices, and particularly those of women, are often shut down and written off by large, established players. This can be a discouraging factor – often deterring the initial resolve to act. Through reaching out, through refusing not to be heard, this campaign became solidified in the public sphere. It became a talking point that could no longer be ignored.

5. Face the public debate and the internet trolls

With press coverage giving the campaign great visibility, this naturally meant having to meet opinions opposing the change.

Many dismissed the importance of the campaign. It was claimed by some that this act was merely symbolism – that the world won’t change by changing one definition.

Maria Beatrice Giovanardi respectfully argued that it is important. She continued to explain that sexism, feminism, gender are complex issues – and symbolism does matter.

She pointed out that talking about the dictionary definition contributes to the debate on the wider issues to which it pertains. Several media outlets such as NY Times and The Bookseller, and have all since brought this into the limelight to all of their millions of readers. This meant drawing attention on the issues of sexism also to those who may not have been aware. 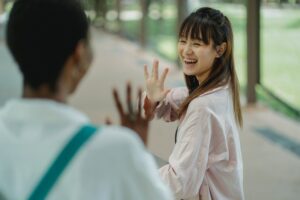 Whilst that part of the resistance to the campaign was at least centred on rational arguments, others met it with sexist and dehumanising abuse.

A portion of people responded with the very same terms and slurs that the campaign aimed to eradicate. This is a recognisable struggle for many activists in many areas of social justice. But how do you deal with this on a journey to change?

Maria Beatrice Giovanardi approaches this with a very meaningful outlook. “You have to keep pushing against the tide,” she says. As people came back at her with derogatory slurs and abuse, she actively converted these words into reminders of why this campaign really mattered: to stop sexism, to stop the dehumanisation of women, and to alter the narrative these people are caught up in.

She managed to turn the nasty element of the backlash into motivation, channelling unpleasant instances towards greater productivity, for the greater good, for keeping the end goal in sight.

By a certain point, through the building of a collective voice and the engagement of press, the campaign had achieved a successful height of awareness and Oxford University Press had responded. However, the real change had not happened yet. The next stage took perseverance and continued pursuit.

The entry of linguists and lexicographers to the conversation in one sense gave the movement even more credibility. Within this, however, a new challenge emerged to achieve common ground between the goals of feminism activism and the linguistic expertise.

For some linguists, the suggested change was inappropriate. They argued that the dictionary’s purpose is to describe, rather than create reality. Therefore, the derogatory terms were there because they are actual examples from real society. Thus, they argued, it not incorrect or sexist in itself, but rather a reflection of reality.

Maria Beatrice Giovanardi met in person with one of the lexicographers who initially opposed the movement’s aim on the aforementioned grounds. Maria Beatrice Giovanardi argued that the contemporary definition was indeed not a common nor true representative of ‘woman’. She also highlighted that whilst derogatory synonyms indeed do arise in everyday usage, these are not equally reflected in the definition of ‘man’ – so, she tactfully asked, why are they there for ‘woman’? She also pointed out that the example sentences presenting women as sexualised and at subordination to men were not an accurate reflection of the full reality.

Maria Beatrice Giovanardi took care to make her case in a respectful way that acknowledged the expertise of lexicographers and linguists, to get them onboard rather than antagonise.

7. Persevere – change is neither immediate nor linear

Eventually, with journalists keeping the debate in the public eye, with experts in the conversation and with the petition up to 30,000 signatures, Oxford University Press finally gave a direct response to Maria Beatrice Giovanardi. Having previously announced their resolve to review their definition, in March 2020, they finally invited Maria Beatrice Giovanardi for an open table discussion. This marked huge progress. It showed the perseverance and drive was paying off and the discourse was changing from awareness to action.

This step took place just before the world was put on pause by Covid-19, putting the initially planned negotiation on hold. After some months of the pandemic digressing action, Oxford University Press had again gone quiet.

Maria Beatrice Giovanardi, however, persevered. Seeing that the Oxford University Press had promised an active response, the success was near. She thus continued to send emails and pressure them to stick to their word.

Finally, in November 2020 this brought results. The crucial conversations between dictionary and activist took place. They found common ground, and the derogatory synonyms were evicted, other than ‘bitch’ which is marked as ‘offensive’, and example sentences were replaced with dignified and contemporary narratives.

Since achieving the success of the campaign’s aims, the work of Maria Beatrice Giovanardi continues. Now in her home country of Italy, the derogatory and sexist definitions of women face a mirror, which they did not when this campaign started in the UK. And so, the work of this activist persists as she acts to grow recognition and pursue the needed change.