How we helped in saving an island - European Activism Incubator
22006
post-template-default,single,single-post,postid-22006,single-format-standard,theme-hazel,woocommerce-no-js,ajax_fade,page_not_loaded,,select-child-theme-ver-3.10.1537557858,select-theme-ver-3.10,wpb-js-composer js-comp-ver-5.7,vc_responsive

How we helped in saving an island

The European Activism Incubator’s service team supports the registration process of non-profit organisations in Belgium. We handle cases of like-minded organisations from around the world who wish to set up here. The question we often get asked is, why would a non-Belgian organisation choose Brussels over their local alternatives?

Many Belgian non-profit organisations are associations of national, regional and local non-profits from across Europe operating in a similar field. They unite to run European projects and carry out advocacy and lobby work towards the European institutions. They are also a contact point to the European Union for their members. Other legal entities, such as companies, local and regional authorities, and even private persons, can also form such associations.

But there are many other reasons for why organisations decide to set up in Brussels.

This month, we have completed a registration process for the Cyprus Environmental Stakeholders Forum (CESF). It is an organisation for joint action of Greek Cypriot and Turkish Cypriot NGOs, individuals and other bodies, who come together to tackle the environmental challenges on the island of Cyprus.

The challenge is, the Republic of Cyprus is represented in the EU only by the Greek Cypriot community, approximately 60% of the island of Cyprus. The other 40% of Cyprus in the north has been occupied by Turkey since 1974 and is not part of the EU. The two parts of Cyprus have been divided by the so-called Green Line, the unfortunate result of geopolitics and global military actions during the Cold War era.

So, a demilitarized zone patrolled by the United Nations since 1974, splits the island into two: and this zone is not only a geographical line across Cyprus, but also a political and economic boundary of the EU territory. Half of the island is an EU member country – the Republic of Cyprus in the south, while the northern part is occupied by a non-EU member, Turkey.

The formation of Cyprus Environmental Stakeholder Forum - CESF, was not an easy concept inside Cyprus or overseas. The military-political situation in Cyprus did not allow the formation of an official bicommunal civil society organisation such as the CESF.

Although in recent years, the island’s locals have been able to freely cross the Green Line at specified checkpoints, in legal terms, they live in different countries. Those who are active in environmental protection on the Turkish-occupied side deal with the Turkish law and public administration, and on the Republic of Cyprus side, with the EU harmonized Cypriot laws and public structures.

Strangely enough, it turns out that neither of the legal systems permits the registration of a legal structure for joint action of NGOs that work on both sides of the island. Yet, such transnational cooperation is essential for the effective mitigation of pollution and climate change.

Why? The fish, the air and the water do not seem to be willing to respect the man-made political border!

For the CESF creating a legal structure is necessary for coordination, transparent governance and accountability and enables the environmental activists to seek funding to support their important work.

Consider what is at stake: One of the aims of the CESF is to take government-directed advocacy to protect the environment. Let’s imagine that it is necessary to require a specific industry to cease their environmentally disruptive or harmful actions. Such legislative solutions would need to be implemented within two separate legal and political systems – i.e. twice the effort!

There is interesting work ahead for the CESF. Our team at the European Activism Incubator has assisted it with the first vital step: registration as an environmental non-profit association in Belgium.

Because of our registration in Brussels, CESF is able to work in both sides of our divided island without inciting negative reactions and bringing people of the Greek and Turkish Cypriot communities together. This was very fortunate for us because it allowed us to draw our funding in full, from an EU program which was in the process of shutting down; any delays would have meant the loss of funding.

The services team at the Incubator spent a good part of summer 2020 drawing up the statutes to set up the internal governance of CESF. We discussed with the founders what the Belgian law requires vis-à-vis what they needed and envisaged for their project. For example, we considered how to ensure that representatives of organisations from both communities are always included within the Board elected by the members. We also prepared a large file of various documents required for the registration at the Belgian Tribunal de l’Entreprise.

The CESF has been officially founded on the 26th of August 2020 as the complete file we deposited at the Tribunal was officially approved within three weeks. This was a lot of hard work for both us, the services team at the Incubator, and the team of nine CESF founders – but you know what?

We are saving an island!

EAI's involvement was a welcome mixture of efficiency, impeccable quality and delivery of all our target expectations. We still find it incredible that the Cyprus Environmental Stakeholder Forum has become a functioning entity. 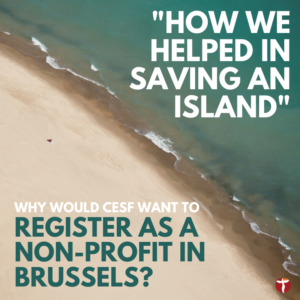 Learn more about how your organisation can set up in Brussels and contact us for support with the process.